9/2/2016 Update: Response from the mayor can be found here:
Mayor responds to CTA transit letter 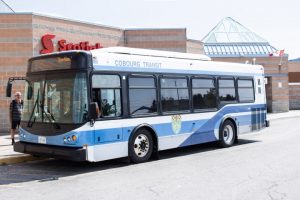 The “Cobourg Transit Review” consultant’s report by the IBI Group was released in February 2014. The cost to taxpayers was $19,000. Since then, none of the recommendations have been implemented. The CTA has sent a letter to Deputy Mayor John Henderson thanking him for being a champion for accountability with respect to the transit study. The letter was also addressed to Councillor Forrest Rowden for the analysis/due diligence to support his statement that “the town is charging sufficient fares and there is no justification for the increase.” Port Hope has taken a proactive approach in reviewing their transit system.

Cobourg should be doing the same for the sake of its riders and its taxpayers. Here are the links to the CTA letter and the study:

CTA response to the Mayor’s letter:

Although the letter was addressed to Deputy Mayor Henderson and Councillor Rowden, the Mayor responded and we needed to clarify the Mayor’s misinterpretation of our letter. The letter was sent to let the Deputy Mayor know we appreciated his due diligence and accountability and to ask Councillor Rowden for his analysis/due diligence to support his statement that “the town is currently charging sufficient fares and there is no justification for the increase”.

We believe that the current bus system is not meeting the needs of our citizens and a systematic review needs to be done in the context of the transit study. The Mayor commented that they will review the rates at the next budget meeting. The transit system needs to be reviewed now and not wait to throw more money at it at budget time.

In the Mayor’s email, he also states that his financial philosophy is based on “cost of living” increases yet net transit costs to taxpayers have increased by 8% from 2015 to 2016. The average inflation of Canada in 2016 is only 1.5 %.

The entire letter can be read here: CTA letter to the Mayor